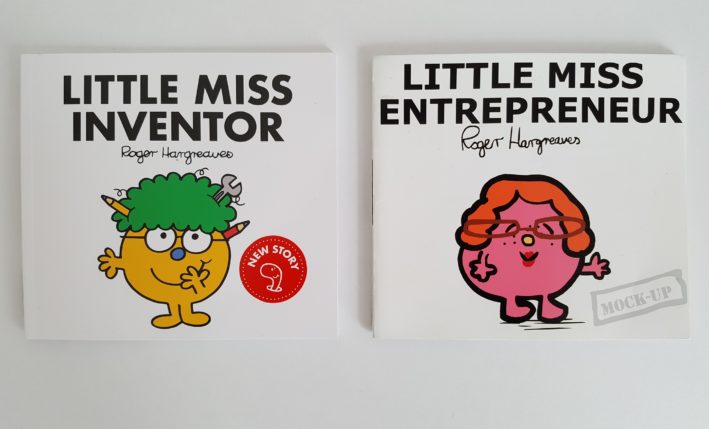 Whatever happened to my lost project…

In 2005 I developed, with the help of an illustrator, an exciting addition to the Little Miss and Mr Men characters, originally created by Roger Hargreaves in 1960s.

Little Miss Entrepreneur was not only a character but also a complete story, which we made up as a mock up book in 2006.

We approached the original rights holders Chorion in 2006 with our idea and we received back a ‘we’ll keep you letter on file’ letter. Chorion later went bankrupt so we tried again making approaches to the Mr Men Company (a Sanrio Company).

We made a number of approaches with our concept between 2012 and 2016 to the new rights owners. We have an acknowledgement of a spread of images we sent and tentative interest expressed by them via email in 2012. However, there has been no response to our later phone calls, emails or letters.

In 2018 Thoip (a Sanrio Company) launched a new character and story called Little Miss Inventor. Close friends of ours who were aware of our original character idea alerted us straight away to this character being unveiled.

It is a real shame Little Miss Entrepreneur’s story was not taken on by these companies, and for copyright reasons we cannot publish our own story. Though we have repeatedly asked for permission or a license to do so Sanrio have not engaged.

I did write a number of letters in 2013 explaining the growth in enterprise education at early school level. Several years ago Lord Young ran his very successful ‘Fiver Challenge’ and that the character was right for this audience in this modern age. More recently there has been a huge interest in entrepreneurial teaching in schools, especially in Wales (Professor Andy Penaluna).

So, I regard Little Miss Entrepreneur as my lost project…she maybe lost but definitely not forgotten,

Perhaps she was ahead of her time, as innovators so often are. It is real shame Sanrio are not interested in our story, as we believe Little Miss Inventor and Little Miss Entrepreneur could be great friends, if they ever met and possibly they could even have a very prosperous future together!

Of interest – a recent report The Future Founders written by the Octopus Group, The Entrepreneurs Network and ComRes

‘57% of young people could not name an entrepreneur who inspires them. Of those who could, Lord Sugar was the most popular choice (7.9%), closely followed by Richard Branson (6.5%). Elon Musk came third with 2.6%. Bill Gates (2.2%) and Steve Jobs (1.7%) were also named repeatedly. Of those who gave an answer, Kylie Jenner was the most commonly named female entrepreneur (1.1%)’